Alright so since I've graduated from MICA I moved in with my boyfriend in Albany. I greatly enjoy living with him and getting to spend time together, however I am not too fond of the town.

Albany is basically a collection of restaurants and malls and a big government building. It also looks like a video game when you drive into it: 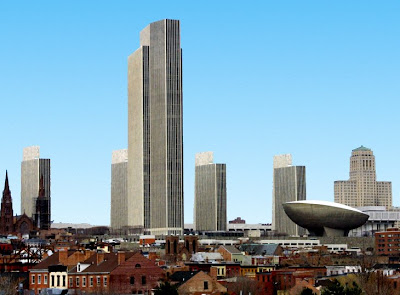 It was a bad sign when the first night staying in Albany my dad's car got broken into and his blackberry and GPS were stolen... and after four years of a crimeless existence in Baltimore. Funny how that is. And I did have pictures of that... but I accidentally deleted most of an album that I uploaded one day.

I got two jobs in restaurants. Both of which lasted a couple weeks. I could write mean things about both, in fact I just did and erased it... but basically one made me miserable and the other was more relaxed but the owners are broke as shit and had no right hiring anyone.

So as far as art goes I haven't made a whole lot. Rod and I invested all our time together into arranging our place so it was livable... including the couple weeks where we had two recliners stacked up and a twin sized bed in our tiny hallway. Pretty miserable.

I finally got the back room cleared out and organized enough to do work in. I've just been making some books for my etsy there. I have come up with some art ideas. Like how I would love to set up a studio to make paper. And I have had some sleepless nights because all I can think about are ideas for making things like screenprinted t-shirts that incorporate the designs of the netflix origami shirts I make... or how I could possibly make an artist book I made for fibers class into a limited edition artist book. I'm sure a pin-up book with a nylon stocking cover would sell, even at steep prices. Maybe. I just can't afford that investment.

But essentially I am very broke. I haven't worked. I start my new job on Monday at infamous graphics Thank God!!! But I am going to try and help Rod pay his tuition. Because he's an international student he has to pay full tuition. Because he doesn't have a green card he can't take out a loan in his own name. Because he's in the SUNY Albany grad sculpture program they don't cover his entire tuition. Basically everything is working against him right now. This town is a black hole, but we will make it out alive.


Wow that got pretty depressing. Sorry.

I'll try to make art when I have money I promise!
Posted by Kate Glenn at 3:54 PM