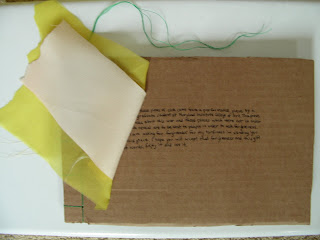 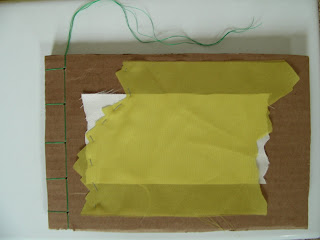 This book was a part of Mail Art Fun Club, I sent it to an address in North Carolina. The cloth on the front is from a performance piece by a graduate student, where there were ribbons hanging down around a cast figure shaped sculpture and they were all suspended and after a speech by an actor and the artist they put the feet of the sculpture on the ground and a whole bunch of people went in and cut away at the ribbons. They told us to take the remnants and mail them to people to ask for forgiveness, or to ask for the strength to forgive. I mailed it on this book because I was supposed to send art in March but I did not make it or send it until the beginning of April. The inside pages are readings from my Urban Theory class, poems from Walt Whitman and various other writers.
Posted by Kate Glenn at 3:56 PM